Arbitrary solar illumination and viewing conditions are allowed. MCScene output can be utilized for a diverse range of applications including mineral prospecting, environmental and land use monitoring, and military surveillance and reconnaissance.

We have assembled a collection of MCScene-generated hyperspectral and multispectral data sets that are available for download. The intent is to provide physically accurate, truthed data for the purpose of algorithm validation. All data sets include not only the synthetic hypercubes, but also corresponding data cubes for source reflectance and path optical depth for all sensor pixel lines-of-sight.

Be forewarned: Two of these data sets require downloads of hundreds of megabytes of data. If you have questions about how these scenes were generated, please contact Dr. Alexander Berk.

The first scenario is pretty straightforward from a reflectance retrieval point-of-view – uniform illumination and uniform aerosols. A nadir-viewing hyperspectral sensor looks down on NASA’s Stennis Space Center from 3 km altitude. The sensor has 125 channels spanning 400 – 2500 nm, 511 x 511 pixels with a pixel size of 2 m. The atmosphere model was MODTRAN’s mid-latitude summer, and the aerosol profile was MODTRAN’s rural model. Scenes for a sequence of three aerosol loads were generated. The first used the default profile amount for rural aerosols (sea level visibility at 550 nm = 23 km). The second and third simulations were identical to the first, except that the aerosol amount was scaled by 50% and 150%. 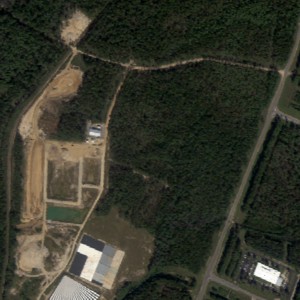 This scenario is more complicated than Scenario 1. A hyperspectral sensor looks down on Virgin Mts., NV from 6.5 km altitude above sea level. The sensor has 125 channels spanning 400 – 2500 nm, 255 x 255 pixels with a pixel IFOV of 1 mrad. The atmosphere model was MODTRAN’s mid-latitude winter, and the aerosol profile was MODTRAN’s rural model. The simulation sequence has the sensor staring at the same spot on the ground and holds the sensor altitude constant while varying the zenith angle to the sensor (0, 45, 60, and 70 degrees). Retrieval methods for non-nadir views have to account for the fact that the path through the atmosphere is longer at the top of the image than it is at the bottom of the image. For flat terrain, the path length is usually constant across a pixel row. For the Virgin Mts. cases, this can’t necessarily be assumed to be true as there is significant elevation change in the imagery.

Views of Virgin Mts., NV from 6.5 km altitude: The center of the sensor FOV looks at the same point on the ground for all scenes – from left, the zenith angle to the sensor is 0, 45, 60, and 70 degrees, respectively.

Broken clouds are a problem for surface reflectance retrievals. Most retrieval algorithms assume uniform illumination. Partly cloudy scenes are anything but uniform. Here, a nadir-viewing multispectral sensor looks down on Picatinny, NY from 20 km altitude. The sensor has Landsat spectral channels, with 6 bands spanning 485 – 2215 nm, 301 x 301 pixels with a pixel size of 30 m. The atmosphere model was MODTRAN’s mid-latitude summer, and the aerosol profile was MODTRAN’s rural model. Two scenes were generated, one with, and one without a stratocumulus cloud field. The clouds cast shadows of varying depth. Sunlit areas in the cloudy scene are brighter than the corresponding areas in the cloud-free scene due to the added illumination of photons scattered from nearby clouds. As for the shadows, this added illumination is non-uniform as well.

Nadir view of Picatinny, NY from 20 km altitude: At left, a cloud-free scene -at right is the same scene with a stratocumulus street cloud field.

MCScene is no longer restricted to downward-looking scenarios. Here, a sensor equipped with a fish-eye lens captures a full hemisphere view of the sky. The sensor has 5 spectral channels with band centers of 440, 565, 675, 870, and 1020 nm. The cloud field type is altocumulus and was generated by CSSM. It has 50% fractional coverage, a base altitude of 4 km, maximum thickness of 600 m, and a maximum vertical optical depth at 550 nm of 5. The atmosphere model was MODTRAN’s mid-latitude winter, and the aerosol profile was MODTRAN’s rural model. Ground surface was predominantly vegetation. 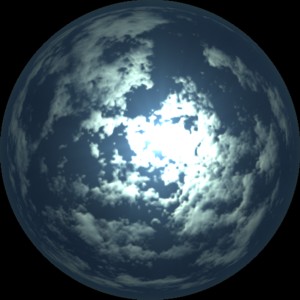 Fish-eye view of a synthetic altocumulus cloud field from the ground.